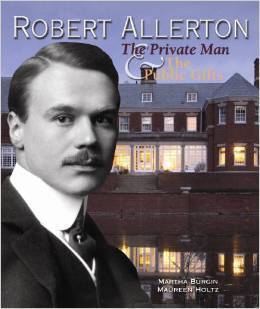 From his roots on Chicago's Prairie Avenue (the "Sunny Street That Held the Sifted Few"), Robert Allerton later made an impressive mark on Central Illinois as well as on the island of Kauai. This biography invites you to enter the gates of Allerton's Georgian estate outside of Monticello, Illinois, and then to visit his Kauai paradise. Meet him through the memories of his friends and acquaintances, including artists from around the world and members of Chicago high society. Nearly 150 photographs, many never before published, bring the story to life.

"The real strength of this book is the meticulous research, which uncovers the complex life of Robert Allerton. During his lifetime, Allerton shunned the limelight, creating a magnificent estate in Monticello that was to be enjoyed only by intimate friends, and donating generously to numerous philanthropies, but with no desire to be publicly acknowledged for these gifts. This book, for the first time, unravels the story behind a name which is known, but little understood. A fascinating read for anyone with an interest in Chicago and Illinois history." –William Tyre, Executive Director and Curator, Glessner House Museum, author of Images of America, Chicago's Historic Prairie Avenue (2008)

"This engagingly written, exhaustively researched, and exquisitely illustrated book does much to remove the cloak of anonymity that surrounds Robert Allerton's name. It explores Allerton's generosity as a donor to institutions large and small–the Art Institute of Chicago, Allerton Park, and the public library in Monticello, Illinois, for example–while recounting his life as a farmer, businessman, art collector, and world traveler. As well, it sheds lights on his relationship with his partner for more than forty years, John Gregg, whom he legally adopted when John was 60 years old." –Myron A. Marty, author of Communities of Frank Lloyd Wright: Taliesin and Beyond (2009)

"The authors of this book have researched extensively, weaving a well-written history to help me fill in all the gaps about my great-grandmother's family. I was happy to finally learn more about them all." –Sean Johnstone, Robert Allerton's great-grandnephew